Fibroid Awareness is Month has passed in the state of Georgia, but sharing your story can provide hope for other women as they fight their fibroids in silence. Featuring Kathryn Bailey and her story -remember no story is the same, every journey is different. 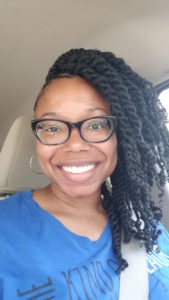 When I was 16 years old, I learned my mother had fibroid tumors growing in her uterus. She had been living with them for years (and all that entails) but by this time they had grown to the size of a 6-month old fetus. So at the age of 46, she opted to have a hysterectomy.

Fast forward 13 years (2010), and I received my own diagnosis of fibroid tumors. I know that fibroid tumors can increase the pain and bleeding during your menstrual cycle. However I have always had really bad cramps and heavy bleeding so I had no reason to believe that I had fibroid tumors. The OBGYN who diagnosed me told me that they were small and as long as they don’t bother me we wouldn’t worry about them.

In 2013 was told by my new OBGYN that my fibroids had grown and that I might want to consider surgery. I told her that they weren’t bothering me and I would just wait until they did. Well about a month later I noticed that I had to urinate often throughout the day and even more so at night. I would wake up 4 times during the night just to use the bathroom. I thought maybe I was drinking too many liquids at night so I tried to limit them before bed time. Nothing seemed to help. I was so exhausted that I began to wonder what could be causing and then it finally hit me. My fibroids were pressing on my bladder. I went to see my OBGYN and told her about the frequent urination and we decided that the fibroids had to go. There were several sonograms and MRIs to determine the approximate size and location of my fibroids. The results from these tests showed two fibroids (one baseball size and one golf ball size) on the outside of my uterus (subserosal). My OBGYN opted for a laproscopic myomectomy that would take 2 hr to complete, followed by an overnight stay at the hospital.

Once they began surgery, my OBGYN found that the sonogram and MRI did not tell the whole story. Instead of only two fibroids there was another massive fibroid (my OBGYN called it a “monster”) on the back side of my uterus that the sonogram and MRI missed. She guessed it was between 10 and 12 inches long as she was not able to measure it during surgery. My 2 hr surgery turned into 5 hr and I was in the hospital for 4 days. During the surgery I lost a lot of blood and my OBGYN was concerned that I was bleeding internally. She ordered another MRI to make sure that I wasn’t bleeding because if I was, she was going to do a hysterectomy. Thankfully, the MRI showed not internal bleeding as I was devastated at the thought of never being able to have children. Although I wasn’t bleeding, my blood count was still really low. I have never been so aware of my own heartbeat before. It felt like my heart was working overtime to circulate the blood through my body and with each heartbeat I had a pounding headache. I felt like I was dying. I was given a blood transfusion (I needed two bags of blood) after which I felt much better. After I was released from the hospital my recovery was pretty smooth and I returned to work after 3 weeks.

Three months after surgery, I had another sonogram done and two small fibroids were found. Over the past 4 years, my OBGYN has monitored their growth but for the most part, they have not gotten much bigger. In addition to exercising more throughout the week, my OBGYN suggested decreasing my dairy intake, with these changes I have avoided surgery and maintained a healthy lifestyle.

FIREBALL TUMORS – What is that ? Somewhat of a Western Approach

Biochemical Reaction: Is that where my FIBROIDS came from?