1.  What is your theory about where fibroids come from?

I believe that we inherit the genetic potential for fibroids. However, fibroids do not manifest unless they are triggered into existence by some traumatic event or stressor. The stressors/events are commonly related to relationships, be they romantic or familial, abuse (verbal, physical or sexual) school, work, finances, creativity and not comfortable in one’s sexuality.

2.  Why do you feel that fibroids are more prevalent in the African American Community?

Fibroids are most common in Africans and African-Americans. Whatever increases the occurrence of fibroids in these groups may have had a protective, more beneficial use to us in Africa prior to our modern era. Why African-American women experience fibroids more than White women has to do, in part, with the circumstances that led to most of them being brought to America in the first place. There is a history of and continues to be racism and  socioeconomic disparities. There’s violence against women in and outside their homes. There’s the pressures of single parenthood. There are women juggling a full-time job, taking care of a family, working full time, going to school and taking care of a sick or elderly relative. Vitamin D deficiency, toxic personal skin/hair/nail care products and unhealthy eating habits all play a role in the progression the fibroids. Somethings got to give under all these pressures and is usually the women’s health because we typically put everyone else’s needs above our own.

3.  Where did your love for holistic medicine and the management of fibroids come from?

In the early years of my medical career I learned a lot from the Muslim and Hebrew Israelite communities here in Atlanta. I began to learn about healthy living and that there is more to healing than drugs and surgery. My love for teaching and assisting women with their health goes beyond fibroids. I have come to learn that our bodies are magnificent and intelligent. Our bodies know what to do if we get out of their way. If we nourish them with what they need and remove what hinders them, our bodies thrive.

4.  Have you managed a patient with fibroids initially until they were fibroid free without surgical intervention? If so, what size were her fibroids and how many did she have? If so, what did her medical management look like?

I have had a few patients whose fibroids were 1 cm or less. After 6 to 12 months of healthy living,which includes seven or more hours of sleep, organic  whole foods eating, minimal sugar, exercise, stress management, work that they love, supportive relationships and healing emotional wounds, their fibroids were no longer detectable on ultrasound

5.  Is there a such thing as a fibroid being too large to manage with holistic medicine/methods?

Fibroids can be managed holistically depending on your goals. If you are 35 years old and can’t get pregnant, you will probably need to get the fibroids removed surgically. If you are not interested in pregnancy and you don’t mind your belly being distended then holistic measures in most cases can improve your periods. Once fibroids get large they don’t shrink as much with holistic measures but the bleeding can improve tremendously. Fibroids on the inner uterine lining (submucous) may or may not respond to holistic measures.

Vaginal childbirth is possible after a myomectomy, however, the surgeon doing the surgery can only make that call. If there is minimal dissection on the uterus then vaginal birth can occur.

7.   Do you think that uterine fibroid embolization is the “ go to treatment” for fibroids as physicians claim? And are pregnancies successful after UFE?

There have been some successful pregnancies after UFE. However, it is not approved for women who wish to have children at this time. Depending on your age, it can put you into premature menopause. I had a patient who was a physician,  desired to have children and was 35 years old. This happened to her prior to meeting me and she said the radiologist did not tell her that menopause was a risk. Also, UFE causes fibroids to die and shrink to 50% of the previous size. They become hard with calcium deposits. We don’t know how that affects your uterus to contract doing childbirth.

8.  What are the most common risk factors for fibroids that you have observed while practicing?

Being a woman of color and experiencing the stressors and traumas I’ve discussed already are the common risk factors for fibroids.

9.  What are your thoughts on radioactive ablation of fibroids?

Don’t know a lot about it, however, I would think it would not be useful to women who have a lot of fibroids. The length of surgery would be prohibitive.

10.  What is your advice for women trying to get pregnant with fibroids?

If you are trying to get pregnant and are already 35 to 38 years old, I recommend freezing some of your eggs if it’s important to you to have your own biological child. The oldest woman I’ve seen get pregnant who had fibroids in my practice was 40 years old and her uterus was approximately the size of a 14 week size pregnancy. In 26 years of practice, I’ve not seen anyone get pregnant with a fibroid uterus larger than that. To the younger women out there who are reading this, my advice to you is to be evaluated for fibroids if you pass blood clots with your period. Heavy periods can be an early sign of fibroids developing. I have followed patients for 4-5 years sometimes before the fibroids show up on ultrasound. They have to be at least 5 mm in size to be seen.  The sooner you catch fibroids the more likely you are to shrink them holistically.

11.  Do you think natural pads, tampons and diva cups makes a difference as far as fibroid management is concerned?

I don’t think they make a huge difference in shrinking fibroids, however, anything you can do to decrease the toxins on and in your body will help your overall health. 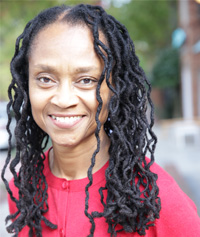 ESTROGEN DOMINANCE: What does that really mean?

Are You Counting Sheep OR Losing Zzzzzs?